The Gerald Schoenfeld Theater was designed by architect Herbert J. Krapp, modelled on the nearby Shubert and Booth theatres designed by Henry B. Herts. In 1917, the Shuberts built the Gerald Schoenfeld Theatre (originally the Plymouth, renamed in 2005 to honour the chairman of the Schubert organisation following his death) along with the contiguous Broadhurst Theater. Originally, the playhouse was leased to Arthur M. Hopkins, to great success.

After Arthur M. Hopkins passed away in 1948, creative control of the theatre once was once again that of the Shuberts, who still own the venue to this day. In 1987, the theatre was designated as a New York landmark.

The limited engagement production “A Steady Rain”, starring Daniel Craig and Hugh Jackman, broke the box office record for the Gerald Schoenfeld Theatre, grosing $1,292,210 over eight performances in December 2009. In 2014, this record was broken again by the production “It’s Only a Play”, starring Matthew Broderick and Nathan Lane. 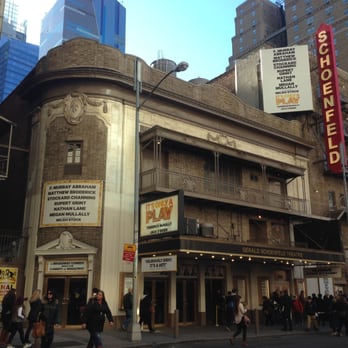